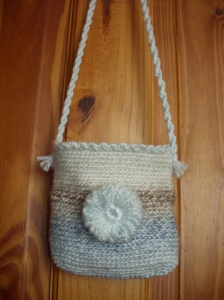 Tada!  It’s a likkle bag!  A bit wonky but cute enough to be allowed house room 🙂

The pattern called for some stitches I haven’t learned yet so I improvised a little.  Although it would be quite easy to look up some videos, I really don’t want to learn from videos (yet) as then class would be quite pointless.  Besides, I might learn the stitches wrong plus I don’t want to skip ahead of others in the class, it’s nice that we’re all beginners together. 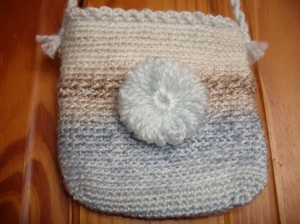 The edging called for ‘crab stitch’, I replaced it with 3 chains slip stitched into every second dc, and the flower used a few stitches I’m not yet familiar with, so I loomed a flower instead.  The loom is Clover’s Hana-Ami Flower Loom, a great little tool, so easy to use.  I hope one day I’ll be competent enough to combine crochet and loomed flowers together like this:

This weekend saw the unveiling of the Time Travellers Exhibition at Spaceport, with costume characters appearing to celebrate the launch.  If there’s two places guaranteed to bring out the inner squee in me, it’s yarn shops and Doctor Who exhibitions with live character appearances.  So off we went.

My hubby, being unusually observant, noticed that I had my knitting bag with me.  “Oh, you’re not bringing your knitting are you?” he groaned.  “Right I am,” I replied, “because if there’s a Cyberman or a Sontaran there, I’m gonna get them to knit!”  He just raised his eyebrows at me and shook his head a little.  I guess he was wondering if I was being serious or not, and probably hoping I wouldn’t get an opportunity.

I was delighted when the first monster I saw was a Cyberman, and my son, finding the thought of a Cyberman knitting as hilarious as I was, promptly asked him to pose with the knitting needles! 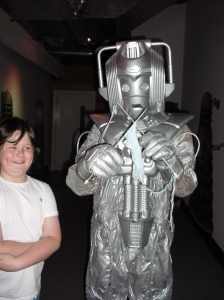 Our next willing participant was the Sontaran. 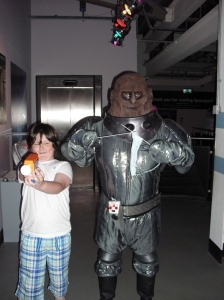 The Pig Slave was very enthusiastic, and full of mischief too! 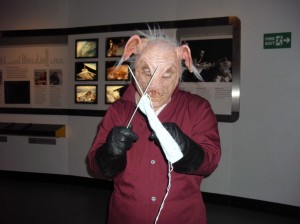 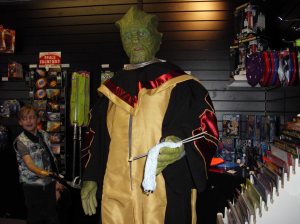 The Time Travellers Exhibition is being run in association with Hyde Fundraisers who provide costumes and props (as well as an immense amount of time, energy and patience) to raise funds for various charities.  They truly are an amazing bunch.

By the way, isn’t this just The Best Super Lambanana Ever!?! 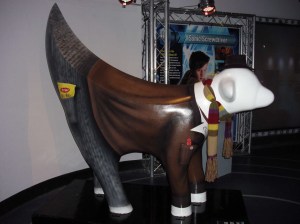 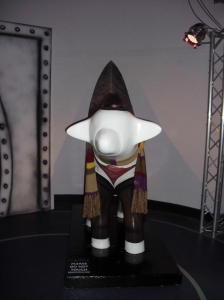 This week we learned UK double crochet or US single crochet. (I’m so glad the difference between UK & US terms has been pointed out early on, now I can be on the alert for it!) I continue to be amazed at how fun and easy it to create 3D shapes with such limited knowledge and experience! After a bit of practice, I thought I’d try to make a little Critter, and this is what happened: 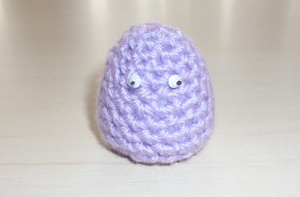 Feeling really pleased with myself for ‘free-forming’ something without a pattern, I proudly presented it to my son. He was quite underwhelmed to say the least. I told him, “It’s a Crochet Critter!” He replied, “It’s an unformed…… Thing……. with googly eyes…” I don’t care, I think it’s cute! Though I might treat it to some bigger eyes.

We also learned how to work colour changes and how to work from a chart. My first attempt didn’t go very well (the largest flower) as I worked the first round of dc into the chain, rather than the centre of the chain like I was supposed to, and ended up with eleven petals instead of the twelve the chart showed. 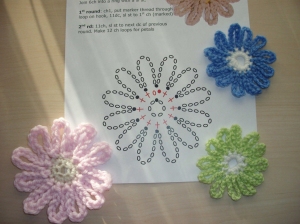 Here is some of my practice Stuff … Posted further down in the post because I didn’t want this picture appearing in the Reader! 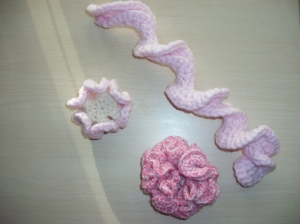 There won’t be any lesson next week as it’s a Bank Holiday. That means a lot of time to practice. No more Things or Stuff though, not yet anyway. A Proper Project is on the hook and almost finished… I think it’s safe to say I’m enjoying learning to crochet! 🙂